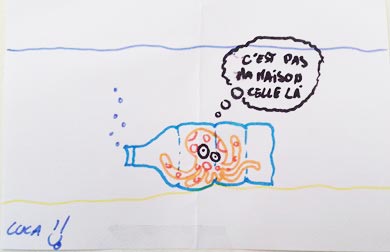 This year, for the World Oceans Day, BeMed participated in an awareness raising day in Menton for CM1-CM2 students.

Organized by the port of Menton, this day brought together several organizations in the region: Natura 2000, Villa Blanche, Les Petits Débrouillards, Souffleurs d’écumes, Le Centre de Découverte du Monde Marin and Seaplastic. The children were able to address the themes of marine fauna and flora and their habitats, cetaceans in the Mediterranean Sea and plastic pollution.

With BeMed, children thought about what they could do to reduce plastic waste in the sea. Some of the solutions proposed included waste sorting, recylcling, plastic reusing, saying no to packaging, and replacing plastics items with alternative materials.

To spread the message and conclude the workshops, each student wrote a  message for the oceans.