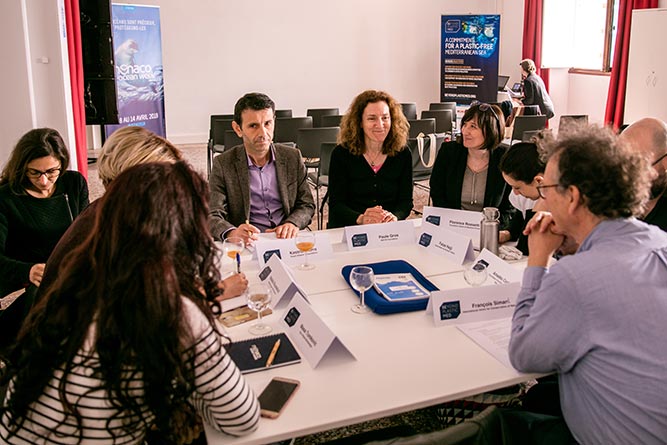 On the 13th and 14th of April, during the second edition of the Monaco Ocean Week, the Beyond Plastic Med initiative (BeMed), organised an experience-sharing meeting involving the project  managers of BeMed’s supported initiatives. Eighteen laureates, selected from the 2016 and 2017 call for micro-initiatives, gathered together in Monaco to share best practices to implement in field actions.

The event was divided into two parts. First, the participants met for an afternoon of informal discussions led by BeMed’s founding members and partner (the Prince Albert II of Monaco Foundation, the Tara Expedition Foundation, Surfrider Europe Foundation, the MAVA Foundation and the IUCN). Each laureate made a video of a presentation of their project on the format “my thesis in 180 seconds”. The objective of the video was to expose the extent of the plastic pollution problem  in their country and the aim of the projects in easily understandable, clear, and concise wording. The afternoon ended with an official presentation of the 2017 selected projects to H.S.H. the Prince Albert II of Monaco Who personally congratulated the laureates.

On Saturday the 14th of April, the 2016 laureates presented their ongoing initiatives and highlighted the successes and difficulties encountered in implementing their actions.
These presentations served as a starting point for discussion workshops to develop guidelines and advice for future initiatives.

Among the key points for the success of such actions, the BeMed winners emphasized the importance of: